Our technology feeds the electrical grid with by providing a strong channel of warm air through turbines. With more favorable ownership costs, a 50+ year life span, and an always-on power generation capability, the Solar Tower is ready to serve your grid. 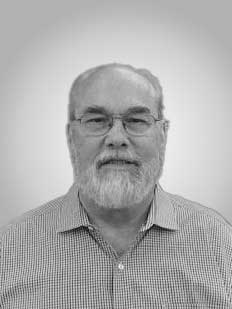 First, a little about me.  My name is Mike Rowley, born in 1954, I grew up in Phoenix, Arizona and became employed by my local electricity utility in my first year of college.  I worked my way up to operator of a fossil-fueled generator before moving my career to the grid operations center of the same company.  After 20 years with the utility, and after reading the US Energy Policy Act of 1992, I hung my shingle out as a guy who was experienced in the electric utility business.  First, I taught the business to natural gas and chemical giants like ENRON and Occidental.  Then I worked for Calpine, at the time an engineering company that was buying small generators in California.  After two years, and originating two of their first power plants for the ERCOT and Western US markets, I moved to Silicon Valley to assist a start-up company called Automated Power Exchange (APX) build a service for all electricity market participants doing online electricity trading and power scheduling, starting with California.  APX sent me to Texas to do the same for the ERCOT market.

I started a consulting business in Texas to teach new market entrants, and some lesser informed old market companies, how to do business in the new deregulated ERCOT market.  That led to an offer from one of the new market entrants in the retail sector, Stream Energy, of a partnership to become their electricity market director. I retired from Stream Energy in 2012 and started Apollo Development with some of my former Stream Energy colleagues to develop and commercialize what I had come to believe, when introduced in 2004, was the future of electricity generation, the Solar Tower.

THE “WHY” OF SOLAR TOWER TECHNOLOGY

WHY SOLAR TOWER TECH IS ABOUT TO JOIN THE POWER GRID

The Solar Tower will be a major addition to all power grids around the world because it is extremely efficient, the most inexpensive plant over its service life and, as Mike Rowley is a retired power grid supervisor, he believes it will be the most compliant of all renewable resources.

Siting that a power plant traditionally has required three issues to be addressed: fuel delivery, water for the generation process and access to a utility transmission line.  Of these three, the Solar Tower requires only access to transmission.

THE EFFICIENCY OF THE SOLAR TOWER – EXPLAINED 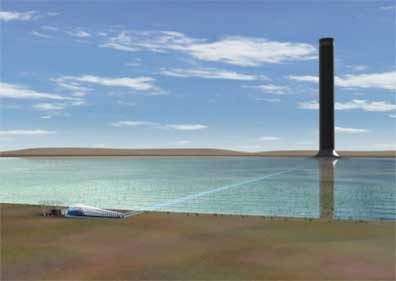 The Solar Tower has no moving parts – except its generating turbines. It is completely passive.  Yes, it is huge! But it is monolithic. The temperatures it deals with are less than 200 degrees F.  The pressures it uses are measured on a barometric scale.  Compare that simplicity to fossil fueled and concentrated solar power (CSP) plants. They use temperatures hot enough to melt salt. Pressures greater than 1000 pounds per square inch.

ALL-IN LIFESPAN COSTS THAT ARE SECOND TO NONE

In this industry, we measure cost as all-in, over the life of the project.

The factors are initial capitalization and incremental production costs over the life of the project.  A major contributing factor is a decision to extend the project’s life by replacing equipment that has reached the end of its lifespan.  We call this process retrofitting.

In the case of fossil-fueled plants, retrofitting usually exceeds the initial capitalization cost. For example, fossil fuel plants generally have a lifespan of 25 years before retirement or retrofitting needs to be addressed.  Solar photo-voltaic (PV) plants must replace panels and upgrade electronics long before reaching 25 years.  Concentrated solar power uses high pressure steam to produce electricity. Those parts of its plant are subject to a 25-year life cycle.

The turbine generators, located where the canopy meets the base of the tower, are literally plug and play, off-the-shelf, units.  And for the same capitalization and warranty cost of owning these units, turbine suppliers will offer to supply and operate these units themselves — with a performance guarantee and liquidated damages for non-performance. The suppliers’ incentive is to share in the increased revenues of the R&D improvements they can create by partnering with the first Solar Tower.

PV and CSP have free fuel, as does the Solar Tower. That is where their similarity ends.

CSP needs water. PV needs water. Water cleanses the many mirrors or panels of ceaseless dust and debris.  The main issue is that PV only uses the photons from the sunlight to produce electricity.  The photons are the segment of sunlight that has mass.  That mass knocks electrons out of the silicon in the PV panel, to be collected by the conductor beneath the silicon.  Because dust has a higher mass than photons, it deflects photons away from the panel, and so must be cleaned away almost constantly, using precious water.

The Solar Tower uses no water to produce electricity. Its 7.5 square mile canopy collects water, one million gallons per inch of rainfall, into cisterns for re-use.

More water is collected by the Solar Tower canopy than is needed for the potable water needs of the plant.  The canopy is negligibly affected by dust and sand — which are moved across and off the surface by the wind. The canopy plastic covering uses the entire spectrum of light waves, as well as photons, to produce the heat required to generate electricity.

As stated, labor costs for plants other than the Solar Tower are high — because of their technology.  CSP and PV systems are complex, intricate, highly refined mechanisms with huge numbers of motive forces and moving parts. Some must maintain very specific tolerances to be of use in generation. Breakdowns are inevitable. Fixes require considerable – expensive – labor expertise.

The Solar Tower is the opposite.  It works on the principal that hot air rises.  By creating a device that is grand in scale, this natural law moves massive amounts of air through the wind turbine electricity generators.  Its moving parts are strictly limited – mainly the turbines – and thus the global proof of concept in Manzanares, Spain operated for seven years, adding power to the Castile-La Mancha grid, with no personnel on site.

As a result, the Solar Tower uses a small workforce of blue-collar workers.  Worker population on-site can be as low as zero, with crews dispatched only as needed.  Here again, low tech wins the day. 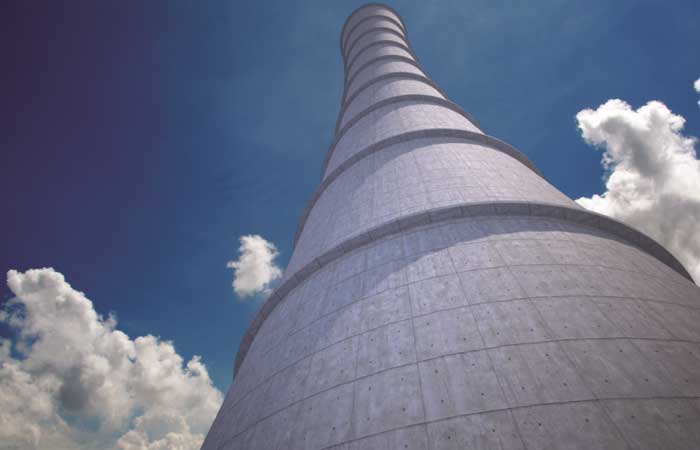 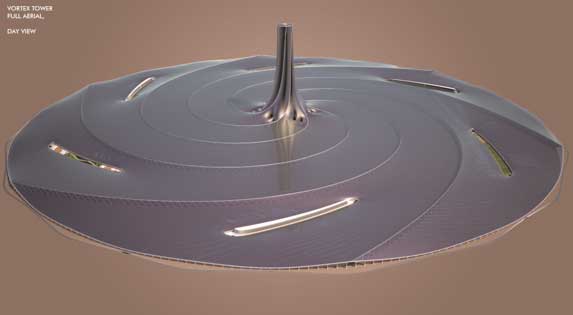 Renewable energy from PV and CSP is intermittent. In electricity terms that means PV and CSP generate when the sun shines. Wind generation depends on the wind blowing.  As a former grid supervisor, I know that “intermittence” means there must be either other generators, or batteries, instantaneously ready to take the place of the intermittent resource, demand for electricity remains when clouds roll in, or the wind stops.  That means the other generators must be kept on the ready… adding another cost!

Typically, the back-ups have been fossil-fueled, which reduces the project’s overall achievement of sustainability goals.

Instead, the Solar Tower stores its generative energy (heat) in the air, ground and structures inside the canopy.  It is called pre-generation energy storage. It is 100 percent sustainable.

Batteries, for post-generation storage of electricity, are an ancillary system. They bring significant capitalization costs, increased operating costs and retrofitting issues. This is why PV generation cannot be completely usable to the grid: Some electricity must be diverted to batteries for discharge when demand exceeds supply. And, conversion to stored energy — and the re-conversion to usable electricity means thermal losses – creates a system inefficiency

CSP requires an entirely separate energy storage system, other than that used for normal electricity generation. Its storage consists of huge containment devices, that are insulated enough to store molten salt or silicon, to create steam when the sun isn’t doing so. The costs are as demanding as the engineering requirement.

SOLAR TOWERS ARE THE FUTURE

SOLAR TOWERS ARE THE FUTURE OF ELECTRICITY GENERATION

Because it is low-tech, Solar Tower is a power generating automaton. We don’t even have to deliver fuel. It just goes.

It is the least expensive, most reliable, most efficient, 100 percent sustainable electricity source that is compliant with the needs of the grid.

That’s why the Solar Tower is the future of electricity generation.

The efficiency of the Solar Tower is unmatched. Imagine a facility requiring not eve one motor or one person to be present to operate 24x7x365?

The Solar Tower works day and night, as energy stored during the day is captured and fed to the power grid. No wastage and always-on.

No Solicitation or Investment Advice

The material contained on this website is for informational purposes only. Nothing on this website constitutes or forms a part of any offer for sale or subscription of, or any invitation to offer to buy or subscribe for, any securities, nor should it or any part of it form the basis of, or be relied upon in any connection with any contract or commitment whatsoever. The material is not to be construed as an offer or a recommendation to buy or sell a security. Clearspan Strategic, Receptor Capital, and other wholly-owned affiliates of Clearspan Strategic are not registered or regulated under the U.S. federal securities laws, the securities laws of any state, or the laws of any other jurisdiction. Proprietary papers and writings are the opinions of Clearspan Strategic and its affiliates. Additionally, the material accessible through this website does not constitute a representation that the investments described herein are suitable or appropriate for any person. The information contained in this website is accurate as of the dates expressly stated herein, and no implication is being made that there has been no change in such information subsequent to such dates.

This website and its contents contain “forward-looking statements” within the meaning of the “safe harbor” provisions of the Private Securities Litigation Reform Act of 1995. These statements are only predictions based on current information and expectations and involve a number of risks and uncertainties including the risk that Clearspan Strategic or its clients cannot execute its business plan for lack of capital or other resources, distribution, partnering or licensing/acquisition opportunities. Actual events or results may differ materially from those projected in any of such statements due to various factors. Any of these risks could cause Clearspan Strategic LLC or its clients’ actual results, levels of activity, performance or achievements to be materially different from those expressed or implied by the forward-looking statements in this website. Except as required by applicable law, Clearspan Strategic LLC does not intend to update any of the forward-looking statements to conform these statements to actual results.

This website uses cookies to improve your experience while you navigate through the website. Out of these cookies, the cookies that are categorized as necessary are stored on your browser as they are essential for the working of basic functionalities of the website. We also use third-party cookies that help us analyze and understand how you use this website. These cookies will be stored in your browser only with your consent. You also have the option to opt-out of these cookies. But opting out of some of these cookies may have an effect on your browsing experience.
Necessary Always Enabled
Necessary cookies are absolutely essential for the website to function properly. This category only includes cookies that ensures basic functionalities and security features of the website. These cookies do not store any personal information.
Non-necessary
Any cookies that may not be particularly necessary for the website to function and is used specifically to collect user personal data via analytics, ads, other embedded contents are termed as non-necessary cookies. It is mandatory to procure user consent prior to running these cookies on your website.
SAVE & ACCEPT